2014 LLS Woman Of the Year Campaign 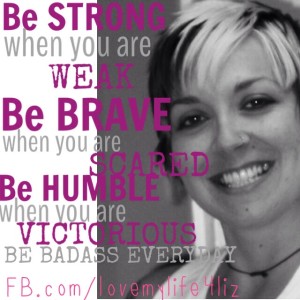 The Man & Woman of the Year (MWOY) Campaign is a ten-week fundraising competition held each spring, among community and business individuals, where each candidate’s fundraising total is kept confidential until the Grand Finale Celebration where the winners will be announced in the company of peers, family and friends. This year’s Grand Finale is on May 17th, 2014.

On October 16, 2011, after a ten year battle with Hodgkin’s Lymphoma, our family lost a precious gift, our beloved daughter and baby sister, Elizabeth Danielle. I am honored to join this year’s campaign in her memory.

Liz was diagnosed with Stage IIIb Hodgkin’s Lymphoma in August of 2002 and fought for nearly ten years with dignity and grace, courage and laughter, love and heart. Through it all, “Love My Life” was her motto. She didn’t love having cancer, but having cancer made her appreciate every aspect of life. Always ready with a smile, she spread light and love wherever she went, to whomever she met, and left behind a legacy of love to many who will miss her forever…

Though survival rates for Hodgkin’s have improved greatly over the years, we still lost Liz and out of the 9,200 newly diagnosed cases in 2013 (1 every hour), approximately 1,180 (3 a day) lost their battle. This is unacceptable.

That’s why this campaign and getting that research grant is SO important! It won’t bring my sister back, but by funding future research, maybe we can save some other family the pain of losing their Liz.

This website is dedicated to the memory of my baby sister, Elizabeth; to honor her fight and her will to live; to say she was here and she mattered, and to do some small thing to help this not happen to another child, parent, or family. Liz took her Angel Wings on October 16, 2011, after a nearly 10-year battle with Hodgkin’s Lymphoma